This began the descent into the ego and madness that is the Harlem Globetrotters. As a kid, you only remember black basketball players doing tricks, spinning balls, doing fancy dunks, and always winning. Yes, I used “black” as an an adjective. Show me a “white” Globetrotter. This exclusion actually carries forward to present day. There are still no white Harlem Globetrotters, despite white people living in Harlem. In 2014, they still proudly boast about their ninth black female Globetrotter taking the court several times throughout the game, turning her into a feature. But no whites. We’ll get back to that in a bit.

The Generals’ web site ‘Player Opportunities‘ page has an important reminder, and why we showed up to root for them. “The Generals serve an important role in the Globetrotters tours and realize the final score does not always define winners.” That is awesome, and really sums up what kids sports should be about. While I don’t think every player in a league deserves a trophy, I think that kids should be reminded that effort matters, even if they didn’t win.

But now, we have to back up again. I went to order the tickets for the three of us and noticed something. The Harlem Globetrotters were playing! Err, OK I got that. But who were they playing? It wasn’t listed. I checked the Harlem Globetrotter page hoping their line-up would have it. Nope. I Tweeted to them asking who they were playing, asking they bring the Generals. To this day, the assholes never answered. That level of disrespect is very telling about the organization. So I did what any logical fan would do, I called the ticket-seller and asked. I spoke with a nice young lady who checked her information and was surprised to find she couldn’t answer my question. She took down my information and said she would get to the bottom of it by calling the Globetrotter organization to find out. Hours later she called back and reported that the Globetrotters would be facing the “World All Stars”. Hrm, never heard of them, so Google their name. I don’t see anything front page indicating that is a viable option. Tack on the word “basketball” and they only show up as the 5th result in a loss to the Globetrotters. What kind of shitty game is this where the opponents aren’t even mentioned anywhere? Where I can’t easily find out they are playing their almost 100-year rival?

The All Stars don’t have a web site. I can’t order a jersey to wear to support them. Other than “lost to the Globetrotters”, they are nothing. “What the shit is that?!”

So we did what any fan would do. We ordered and wore our Washington Generals clothing to the game, and we made signs to support the All Stars. To be effective, we had to make sure they would see us, so we got court-side seats. 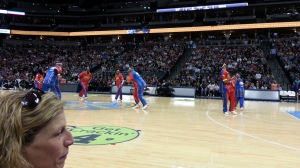 Granted, being the cheapskate I am, there was one row of people before us. But at a Globetrotter game, that is actually a layer of protection from being drug on the court and embarrassed by them. From courtside, we were in a position to support our team. 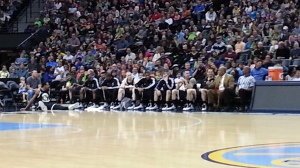 Wow, they didn’t look thrilled to be here. The game started out all about the Globetrotters. They did their warm up, their comedy banter, got introduced one-by-one. When it came time for the All Stars to come in, they barely got their name mentioned. Both teams warmed up to get ready for the game. Just before the game started, Big Easy, with a microphone pinned to his jersey so the entire stadium could hear him, taunted the All Stars. The only taunt I remember was him pointing out that one of the five All Stars on the court was white, mocked him for it, and ended by laughing at him. The other nine players on the court were black. Do I need to remind anyone the definition of racism and that it goes every direction?

The game proceeded, now with ‘fan voted rules’ that were put into effect each quarter. This included a “trick shot challenge” and a “special jersey double point” benefit. So on top of the four point rings (yes, these games have four-point shots), the player wearing the red jersey could do a four-point shot and gain eight points for it. The All Stars tried several times but only made one of them. As best I recall, that was one more than the ‘talented’ Globetrotters. Speaking of, the world famous Globetrotters have a second career as brick layers if it comes down to it. Those dumbasses threw up more bricks and missed more dunks than I have seen in my life. Yes, they missed set-up dunks where the other team wasn’t defending. Absolutely pathetic.

Halftime rolls around and the Globetrotter mascot, Globie, comes out. He did his little dance routine and entertained the crowd.

As he left the court, he pointed at Amanda and my Generals’ attire and shook his head. For a brief moment I thought he might take a diving leap and try to tackle us. He seemed pretty pissed we were there supporting the opposite team. That said, during the “trick shot challenge” quarter, the coach of the All Stars noticed us and pointed to us twice smiling. At least someone recognized our efforts and appreciated some support from the crowd.

During the game, we also got to witness a variety of things that ranged from “what…” to “oh jesus avert your eyes”. It started with an All Star going to make a slam dunk, only to find the Globetrotters stripped him of his shorts and jersey in the process. Leaving him in his underwear to scream out loud and run in a panicked manner toward the locker room. The Globetrotters followed this up with their “slow-mo replay” gag that not only had them reaching between an All Star’s legs and sexually assaulting him, but doing it repeatedly in slow motion. But that was absolutely nothing compared to the half-time show.

I honestly could not watch a majority of the show because of social “norms”. Seriously. They had four local dance troupes doing their dance routines to music. Each wave was full of underage girls wearing revealing skin-tight outfits, doing sexually suggestive dances. Some of their moves and gestures I have seen in strip clubs. I feared that if I watched them like any other person, someone might think me a sexual deviant in all the wrong ways. That was the most uncomfortable 20 minutes I have suffered in years. Back to basketball…

While the All Stars did their share of missing shots, like the Globetrotters, I started to take notice of the scoreboard more often in hopes they would catch up. That is when I noticed that the rigged game is more rigged than I realized. Sure, we know they are told to lose the game and that is expected. The ego-filled Globetrotters have to win, except that one time where the Generals beat them (and we’d love to know the story behind that!). Yes, the Generals’ sweatshirt I wear proudly displays their motto, “Over 12,000 losses since 1926!” Remember the four-point shots, and the bonus with the red jersey due to the special per-quarter rule announced shortly before? At least one time when the All Stars scored an eight-point shot, they were only credited with four. Because the Globetrotters were throwing up so many bricks, and missing so many set-up dunks, the score-man had to further help throw the game.

What does that leave us with?

The Harlem Globetrotters holding the bag. Kids show up and have a fun time. In reality, they leave with a long list of subtle messages driven into their head. That racism is OK because it is humorous. That the underdog can’t win, and that the name-brand will cheat in multiple ways to win. That being a female in this sport is a ‘rare thing’ and makes you a two-minute highlight during the game. That physically and sexually assaulting the opposing team is humor, not a bad thing. Is that really what our kids should be learning growing up? I don’t think so. If anyone else did this on the school playground, they might face being expelled.

That is why I proudly show up and support the opponents. I even retained the serves of a local artist to make sure my signs were high-quality, because I care. Washington Generals or All Stars, doesn’t matter. They need our support to help them win their second game in almost one-hundred years. I encourage you to attend your next Globetrotter game, wave signs, and proudly support the other team. 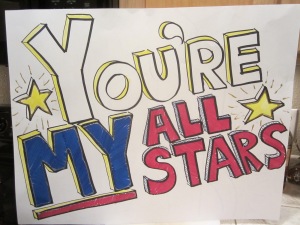 6 thoughts on “What the Harlem Globetrotters Really Teach Kids”